In the first half of Saturday night’s second quarterfinal game, Dayot Upamecano was accused of fouling England captain Harry Kane inside the penalty area. This sparked a VAR debate.

Kane attempted to enter the penalty box while playing against France in the FIFA World Cup 2022 quarterfinal by sprinting from the right side of the field. The on-field referee denied the England striker’s claim for a penalty after he went down just outside the penalty area. The VAR officials rechecked it and said there was no foul.

The supporters’ emotions to the occasion were conflicting, and they had differing viewpoints on the subject. 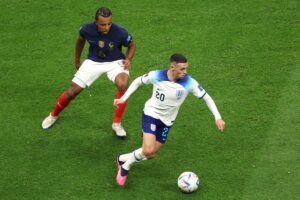 At the Al Bayt stadium, midfielder Tchouameni found space outside the box and fired a shot that reached the bottom corner shortly after Olivier Giroud had tested Jordan Pickford in the England goal with a header.

Hugo Lloris of France, a goalkeeper for Tottenham Hotspur, successfully stopped Harry Kane twice in the first half of the match. On Wednesday at the same location, the winners will take on Morocco in the semifinals